My Grandfather served in the Army during WW2, and my Uncle served in Vietnam. I know that my Uncle suffered from severe PTSD. I watched him suffer while I was growing up. K9s for Warriors provides service dogs for Veterans who come home without hope and feel they have no purpose.

This program literally saves lives as roughly 20 veterans commit suicide every day. Most of the service dogs are rescue dogs, so two lives are saved. I volunteer at the facility and through donations. Please consider this worthy cause.

The Nation’s Largest Provider
OF SERVICE DOGS FOR VETERANS

A Battle Worth Fighting

Roughly 20 veterans die by suicide every day, and K9s For Warriors is determined to change that. K9s For Warriors exists because of a fierce dedication to saving the lives of both veterans and rescue dogs. This program is backed by scientific research and empowers veterans who fought for our freedom to live a life of dignity and independence. Graduates of K9s For Warriors’ program are able to live a life that they previously did not think was possible. Many have reunited with their families, gone back to school, found renewed enjoyment in life, and significantly reduced their medications. 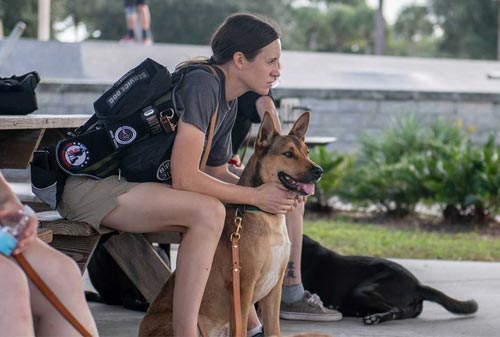 of our veteran graduates report a reduction in medication*